A quilt no one has seen 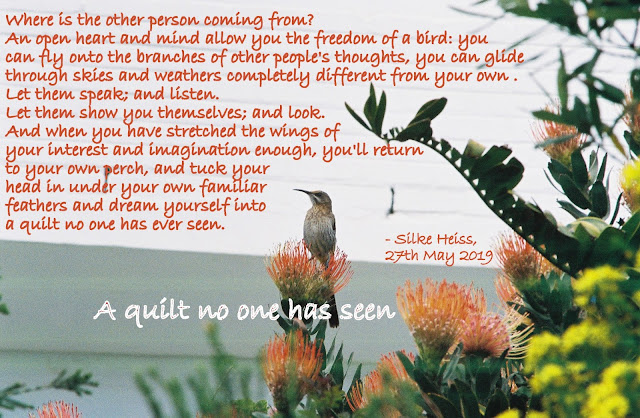 Email ThisBlogThis!Share to TwitterShare to FacebookShare to Pinterest
Labels: being present, being who you are, being-in-the-moment, communication, freedom, individuation, inspiration, mystery, reflections
Location: Hogsback, 5721, South Africa

A question of momentum 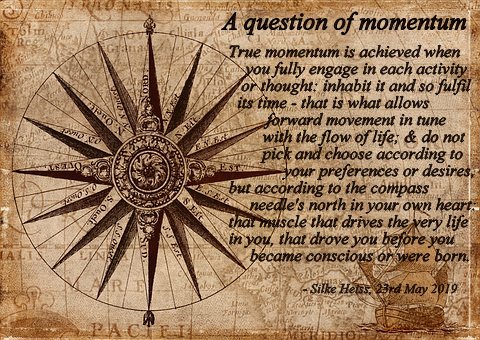 My tortoise journey with poems

The adventure with my book continues. Flow (Poetree Publications) is busy proofreading it and Mike (Max Design) is working on a cover, a draft of which a few of my private readers have already shown thumbs-ups to: thank you.

Only one of those millions upon millions is my book. 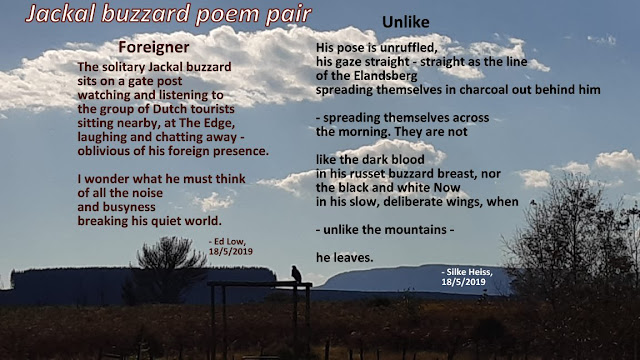 "I effectively have std.8," he says, explaining, "I did std. 9 and 10 in one year, but it was a kind of a jippo matric. But it made me strong. I learned to stand on my own feet."
They're sitting on a bench in the winter sun shining its warmth equitably on them both.
"Well, I've two Masters degrees," she replies, "one of them with distinction, and - as precious as what they taught me is - I've never kept within the academy what I learned. University was never the place for me, I was never at home there. Even now I'm still muddling my way through life against all expectations. Formal education doesn't necessarily teach you how to survive."
"When I had my company," he says, "people with high education sometimes spoke to me, terrified of starting their own business. I used to say to them they should look around. How many people have they seen with their own eyes? Millions. How many of those people did they actually see dying or dead from starvation? None. I've never seen one. So start your own business, have the courage to do so. Do what you have passion for."
She takes out her notebook and pen. Sitting beside him, she is not with him, but with the bird of prey perched a little way from them, and the wintry horizon.
"You're so impatient!" she exclaims at one point, ducking the poem she is slowly composing away from his inquisitive eye.
Finally she is done.
"I've got my poem in my head," he says eagerly, "but I don't have a pen and paper."
"My book is full," she retorts, "and I didn't bring a new one."
He takes and opens her book on the back cover.
"There's a space," he says, and thinks, and speaks, and she writes down his words.
When he is done, he says,
"Let's hear yours now?"
She reads aloud the lines jostled by crossings out, arrows, insertions, revisions.
"That's awesome," he observes. "Same bird, same place and time, but completely different views."
"Yes," she agrees, "My father sometimes said what makes us all equal is our capacity to do harm, but it's the differences between us that make the world alive and beautiful."

Time as an organic fact

One of the 'bibles' that has guided my life is the children's book, Momo (pronounced 'Mawmaw') by Michael Ende. The book is essentially a narrative about the treasure of time. The main character is an orphan girl called Momo. She is shown the origin of time in the form of 'hour-flowers'. These are literally blooms of hours that break from bud to full unfolding and, necessarily, wilting at the end of each precious hour.

Each person is allotted a specific number of hour-flowers in their lifetime. It is as momentous a concept as it is simple, shaping time as a friend, rather than a foe; as an organic fact, rather than a random invention.

To feel time as a natural sequence of moments blossoming their opportunities takes me to the freedom of an infant basking starry-eyed in a kind of milk of existence: the nourishment of life itself being nothing other than time - the hours we are given to build our selves towards as complete an end as we can.

The secret of the writerly gift

The secret of the writerly gift is the ongoing inner alivenesses - your responsiveness to what comes at you from the external world, and your particular ability to calibrate this with your inner world. That dynamic constitutes the adventure of your heart and soul as they are embodied, briefly, in the span that makes up your life. In essence, your gift is the ability to ride the scythe of death - each living, passing moment is marked, memorialised in words strewn about it like flowers upon a fresh grave. 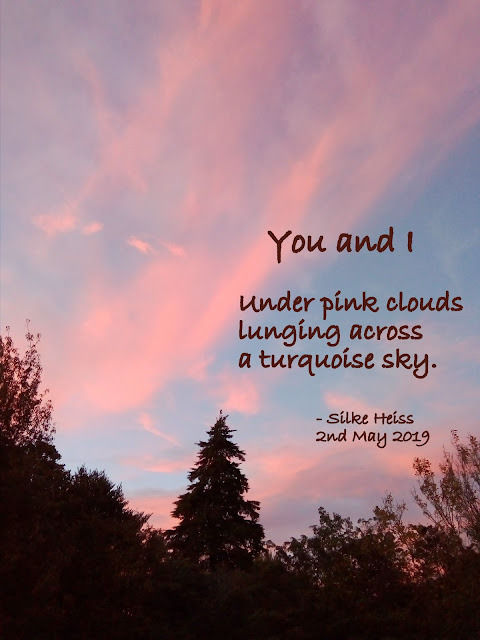 Email ThisBlogThis!Share to TwitterShare to FacebookShare to Pinterest
Labels: capturing the moment, the dynamic between inner and outer world, the nature of creativity, the writerly gift, the writing process
Location: Hogsback, 5721, South Africa

Some kind of happiness

Silence is the place where new becomings are rooted. A child is conceived in the flame of love, but his shaping happens in the dark waters of the womb; as, too, a seed opens its future unseen. All things start in secret, before they try the light.

So this blog has been a time of quiet, full of the rich unknown. Surprises and beckonings pull me into people I've not been.

This site asks me to re-invent it, or myself, out of the quiet. For my footsteps pad slowly, but surely, guided by the sacred dark, leading into ... not quite your 'aha' ... but still: a sense of some kind of happiness in you that this can be possible: the light.

Soft and gentle yet; not bright.

Last night, walking down the dark, dark driveway with my lantern to meet friends - a milling of fireflies. Traffic of gold and silver flightpaths - bobbing, zooming in and out beside my body. Little creatures looking for each other by life's signature of beauty.

Love seeks us out in the differences. 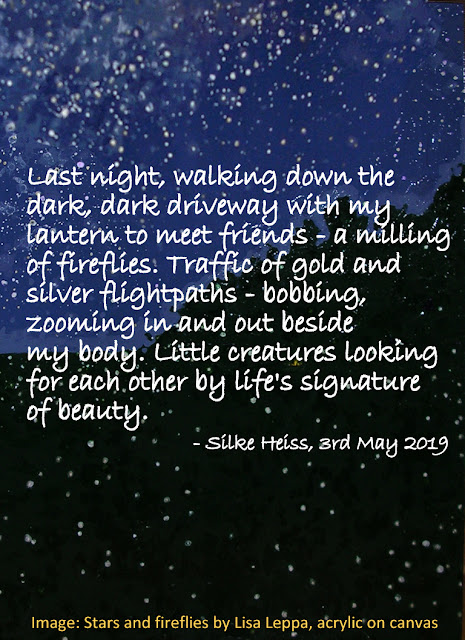