Find the notes sweeter for all that time ...

For Norman's 64th birthday I made him a photo album.

It was his first.

Although he was shy of photos of himself in old age, he pored over it for hours.

I prefaced the album with a poem I'd written several months previously.

Later we went for a truly crazy spin on the 'Red Devil' on the contour path on Hog 1. 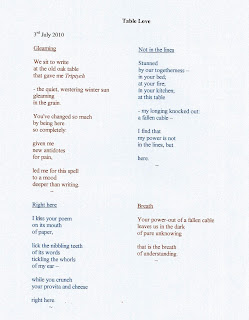 This is another preliminary note that forms part of the story that has formed quite a few sort-of-poems telling the years. It says so much about the man that Norman was, the spirit he still is.

When in late autumn I resumed my travels
back to you

the first night was troubled
by anxieties –
I lay in wakeful doom;
mind rewove the day's events
and past months' tests –
a manic loom that utterly refused me rest.

Since then my trust
is sworn into,
palm-protected by
our pairing –

the fabric of our fingers
joining our best years.

'twas good to get pics I've never seen from Norman's publisher, Jim Phelps of Echoing Green Press - taking me back to the day I first met Norman in the flesh: 18th October 2009, when he read from Triptych in Fish Hoek and to my joy gobbled the cheese sticks I had brought along.

Today
exactly a year ago
was our first meeting.

Over my hips I'd pulled my smoke-blue skirt;
over my breasts an old, pale pink knit-top
covered by cardigan;
my feet in Tsonga slip-ons -

altogether toned down,
I carried that basket of cheese sticks
you devoured.

I was afraid of my own insignificance,
so I avoided you immediately.

Finally, though, after kissing all the people I knew,
I had to turn
to the presence
of you
behind me.

You took my hand
in both of yours,
as if it were an honour -
oh, you were beautiful!

I looked neither up nor down, but
straight into your face
of lines touched everywhere by light,
and your loose hair a-tumble.
Surprised that you were
short and humble.

Then you gave your reading;
silent Jenny pointed lens;
Jim's wine turned to praise inside his mouth
as he besang your poems;
Izzie - in cow-patterend pants -
went on about life, and the past, and ja,
no, if you get off your motorbike
to actually write down the lines that come into your head -
I admire that, you know:
you must be the genuine thing.
Hugh quested -
'WhyTriptych?'
- while Peter, Paul, Lewis and me
sat round listening.

In front of everyone you bent
down to reach
your toes
- unselfconscious as an old elephant,
I thought (and later wrote) -

We mingled; spoke; I stared
at your shirt with words on it
- yours - Alchemy -
stared rudely through
to sense the leanness
of your middle region;

so much that I didn't.
Paul and you exchanged books
- Dog Latin for Comeback -
you asked me, too, to sign,
so I scribbled 'Hello!'
beside the Bodhi Books logo
(designed out of the shadows
caught inside a photo) -
a small figure with inky arm and phallus greeting.

I offered you the last
cheese stick you took
saying, 'You're an angel.'
And I thought.,
'Well - at least I can make sticks
to feed a hungry man.'

- Yes. That is how
our story began.